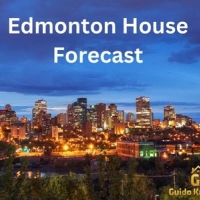 Despite increasing interest rates, Edmonton real estate could be worth more this time next year; however, condos may defy the projection. An upcoming forecast predicts these changes in value.

According to a 2023 market survey forecast from Royal LePage, Edmonton's aggregate home price is estimated to increase by one percent - from $438,300 in the fourth quarter of 2022 up to an impressive $442,683. This weighted model includes median prices for all housing types.

Additionally, analysts project the median cost of a single-family detached home to rise by two percent from $481,800 to an estimated $491,436. Furthermore, the medium price for condos is expected to decrease by 1.5%, down from its current position at $201,300 and reaching an estimate of just over $198,281 over the same duration.

Tom Shearer, a broker and owner of Royal LePage Noralta Real Estate in Edmonton, stated that the inventory shortage seen in Edmonton's housing market is stabilizing home prices while keeping the market balanced.

“We’ve gone through an exceptional time in real estate, and that can’t last forever,” he told Post media in an interview. “Eventually there has to be a normalization, and I think that’s what we’re moving toward in the new year.”

Shearer noted that condos, which are generally more pocket-friendly than houses, don't attract enough buyers to appreciate in value despite their lifestyle advantages for a lot of people.

According to him, first-time homebuyers can now acquire that single-family residence they have been dreaming of without breaking their budget.

Predictions suggest that condominiums will outperform single-family homes in all significant cities across the nation, with the partial exclusion of Edmonton and Winnipeg.

Thanks to the rock-bottom borrowing cost before March, a surge in savings among households, and an ever-increasing preference for more space during this COVID situation, property prices have been on an upsurge for almost two years now. Per Phil Soper - president of Royal LePage who released a statement about it on Tuesday; such activity is expected to normalize soon as we move away from these heightened market conditions.

In 2023, it is predicted that Canada's collective home prices will drop by one percent. After stagnating in the middle of 2023, we can anticipate these figures to begin trending upwards again before reaching their end-of-year peak.

During the last part of 2022 and into 2023, prices are predicted to fall by 2.4 percent from $772,926 down to $754,072 in the initial quarter. Then it will likely dip another 0.03% after that for a total decline of about 755 thousand dollars for the year's start. On the upside though, in Q3 prices may rise up again at an outlook rate of 0.7% - bringing them back up slightly to 759 thousand four hundred two dollars- before climbing even further with a forecast increase of .8%, potentially topping off close to seven hundred sixty-five thousand one hundred seventy-one dollars come year end!

The Realtors Association of Edmonton’s market statistics for the third quarter of 2022 suggests a balanced market, according to a City of Edmonton economic update released on Dec. 5.

According to the economic update, a balanced market gives neither buyers nor sellers greater power and helps keep price growth steady due to demand and supply approaching balance.

The city's report documented that housing starts in Edmonton remained steady and increased 25 percent from the same time a year ago, according to data compiled by Canada Mortgage and Housing Corporation.

In the initial three quarters of 2022, Edmonton experienced an almost 21% year-over-year increment in housing starts, with the apartment (49.8%) and single detached homes (17.4%) start increases! According to official reports from the city itself, this surge can be attributed largely to higher demand for homes among residents of Edmonton.

Edmonton's residential inventory saw a noteworthy decrease of 22%, dropping from 5,012 units to 3,913 in December 2022. This equates to roughly five and a half months' worth of supply--higher than what was seen during the spring season and many other Canadian housing markets. The low sale activity combined with fewer new listings entering the market contributes greatly to this level of availability.

In recent months, the Bank of Canada (BoC) has escalated its benchmark rate from 0.25% to 4.25%, in response to Consumer Price Index inflation consistently remaining above their 2% target for seven consecutive quarters now. As a result, all Canadian housing markets are struggling against an ever-growing increase in mortgage rates.

Through its Quantitative Tightening (QT) program, the Bank of Canada has systematically decreased its balance sheet by 18%, from a colossal $92 billion in late January 2022. QT is merely an expression for when BoC stopped buying Government bonds and failed to replace them as they mature; thus slowly but surely shrinking the size of its total assets.

The Bank of Canada's (BoC) efforts to restrict lending have caused mortgage rates and Edmonton home prices to surge. These fluctuations in the market, along with increasing Alberta and Edmonton mortgage rates over the last year, have resulted in a decreased demand for homes as well as slumping prices throughout Edmonton. Right now, Edmonton's housing market faces a headwind and two tailwinds.

The reason for this is that Alberta holds the fourth-biggest oil reserves in the world following Venezuela, Saudi Arabia, and Iran—most of which are located north where Edmonton stands as the only major city. Added to this, many jobs become available due to activities related to extracting petroleum products from these sources along with its transportation operations. It's interesting to note that the average price for a condo in Edmonton is expected to fare quite differently than other types of housing, seeing as it's only predicted to appreciate by 0.5% in 2023. This could be due to many factors, including an increase in new construction inventory coming onto the market.  All things considered, it seems like now could be a good time to invest in Edmonton real estate - especially if you're looking at houses rather than condos. What do you think about the 2023 housing market? Let me know your thoughts in the comments below!