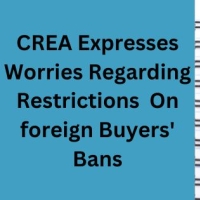 On January 1st, the new Prohibition on the Purchase of Residential Property by Non-Canadians Act will be enforced alongside its newly released regulations. According to government officials, this act is intended to make it easier for Canadians to become homeowners at an affordable cost.

With the new laws in place, anyone found guilty of assisting a non-Canadian to purchase a property can be fined up to an astronomical 10 thousand dollars.

The Canadian Real Estate Association (CREA) expressed its dissatisfaction in a statement to Real Estate Magazine regarding the regulations released Wednesday, and also raised several worries on behalf of its members.

The act's enforcement outlines a variety of conditions, such as exemptions for temporary residents who conform to the set requirements. Thankfully, Canadian citizens and permanent residents are excluded from this restriction.

Eligibility for the program is restricted to international students who have submitted tax returns over a five-year period and have spent most of that time living in Canada. Furthermore, the maximum purchase price for residential property is limited to $500,000.

If you are a holder of a work permit, don't worry! You can still be eligible for purchase if you have been working in Canada for three years or more within the past four years and filed tax returns during at least three of those four years.

The government has approximated that, over the next two years, those who are non-Canadians and exempt from certain regulations would likely be in only small numbers when it comes to purchasing a home - ranging from hundreds to low thousands.

The Canadian government is firm that, should a person from abroad want to purchase property in Canada, they must prove their eligibility - and will bear any costs related to such proof.

Chris Sharpe, a partner at Clark Wilson LLP in Vancouver and a real estate lawyer, believes that the threshold for raising capital is relatively low. This could potentially capture organizations that may have undisclosed investors who are investing smaller sums into projects.

According to the government's assessment, realtors will face minimal additional burden and costs as they already meet current regulations and standards concerning customer identification and due diligence.

CREA IS OF THE OPINION THAT THIS STATEMENT SHOULD BE DISPUTED:

The association stressed FINTRAC's beneficial ownership obligations as an example. The standard requires realtors to identify persons who possess 25% or more of a given entity. However, the foreign buyer bans further mandates that they must also uncover if said entity is 3% or more owned by non-Canadians; such a mandate can result in additional expenses and requirements throughout transactions.

According to CREA, FINTRAC necessitates real estate agents to authenticate customer identity when a transaction is occurring rather than earlier in the process while assisting or advising clients as will be required with the introduction of foreign buyer restrictions.

According to the regulatory analysis, record-keeping is not a requirement for real estate agents; however, CREA has pointed out that this goes against FINTRAC obligations.

The Canadian Real Estate Association (CREA) emphasizes that, without records to prove compliance with the legislation, individuals facing a charge could end up with a hefty $10,000 fine and a summary conviction. Thus it is essential for those subject to this act to keep adequate documents in order to demonstrate reasonable efforts were made towards abiding by the law.

ARE YOU LOOKING TO INVEST IN RECREATIONAL PROPERTIES?

Homes located beyond certain population criteria established by census analysis may be exempt from the ban - such as recreational properties, although not all.

Sharpe clarifies that the government has established an exemption for what he would refer to as “highly rural” residential properties, according to his knowledge.

"In order for real estate groups, law firms, notaries, and realtors to successfully meet the requirements of their jobs," he affirms, "we first need to learn where we can locate a comprehensive list of census metropolitan areas and census agglomerations."

CREA is questioning the process for determining which properties are eligible within certain areas.

According to Sharpe, it is absolutely critical for him and other realtors alike to fully understand this concept and its application in order to provide the best advice possible that protects their clients. He emphasizes that everyone must take the initiative of studying this area thoroughly.